CELEBRATING “TOM SHERRY DAY” AND A LEGACY OF GIVING 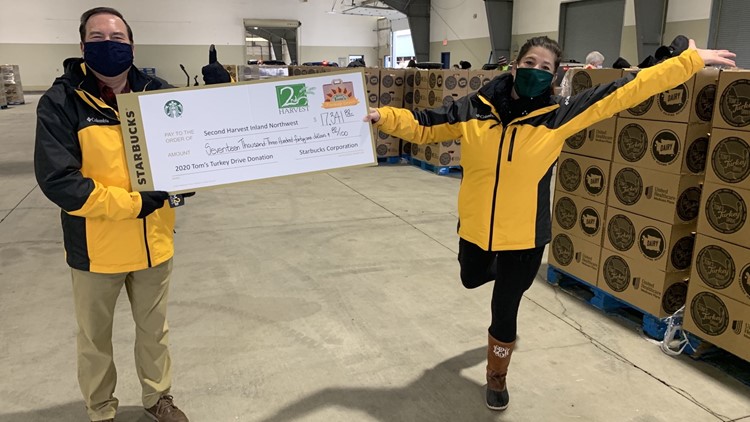 KREM 2’s Chief Meteorologist and Anchor Tom Sherry was Friday, March 4th. In celebration the City of Spokane has proclaimed it “Tom Sherry Day” and KREM 2 is honoring the work and legacy of a Spokane icon. Tom’s last newscast will be tonight (Friday) at 6 p.m. on KREM 2.

Long lines. That seems to define the early days of the annual Tom’s Turkey Drive distribution.

“We just thought, what, can we just knock this thing out in one weekend,” says KREM 2 Chief Meteorologist & Anchor Tom Sherry. And that was the thought. To knock it out in just a few days and be back to business as usual. Those first few years that’s exactly what happened. KREM 2 worked with our partners like Second Harvest to raise just enough to hand out a small meal to people who wanted to prepare Thanksgiving dinner at home. That was the beginning.

If you go forward a few years from that Thanksgiving in 1999 you can start to see change. Partners came on board like Rosauers and the community started to respond. Soon, the weekend prior to Thanksgiving the local stores would be jam packed with Second Harvest volunteers, shoppers and KREM 2 cameras. At the center would be Tom Sherry asking everyone to give what they could so that our neighbors, our friends, could have a Thanksgiving dinner.

“It was at a price point that people could afford, you know, that not just heavy hitters, not rich people could just support but almost every working person could afford $20. To buy a, you know, a Thanksgiving meal for somebody and then you had Second Harvest, handling all the organizing and lining up the volunteers and having the trucks together and then distributing it to the pantries that they already had in place. It’s just been absolutely fabulous,” says Sherry.

The event grew and so did the partnerships. Numerica Credit Union came on in the early days of online giving so we could have a back-up if people couldn’t make it to the store. Franz helped change the meal from small amounts of boxed bread and stuffing to the fresh products we pack in there today. Itron helped defray distribution cost when the event outgrew smaller venues. Starbucks joined the Tom’s Turkey Drive team and provided caffeine and a financial jolt to the holiday event. And the list of support continues. And so does the need. And that’s where the long lines became almost unmanageable.

About a decade ago, Second Harvest brought in a group of efficiency experts to strategize a new format that would allow better flow of foot traffic and expedite the process. Tom’s Turkey Drive was now a two-day event at area Rosauers and the distribution was the Tuesday before Thanksgiving at the Spokane Veteran’s Memorial Arena. The line at the arena would begin to form at about 4 a.m., which was hours before opening. Some years would bring wet snow or fierce wind but the lines would still form in those dark, early hours of morning. KREM 2 crew members would watch people weave through the long line for hours to receive a meal to take home for family and friends. The efficiency experts determined a plan that would cut that time down to 30 minutes or so and allow people to be served with dignity. That was important to all of us, especially Tom. The plan was implemented, and it worked. The line was still long but moved quickly. Now, the numbers were close to 10,000 families being served in a one day event.

“Now that we’ve been doing it over two decades, the stories that I get are amazing. And the older I get, they almost make me cry,” says Sherry. The event continued to thrive and each year all of us working on the project were astounded at the generosity of the community. Shoppers came in with dollar bills to hand to volunteers and kids brought in plastic baggies filled with hard-earned change. Families made Tom’s Turkey Drive their volunteer event of the season and formed emotional connections to the holiday effort. Sponsors continued to give even when times were tough. In 2015, following a devastating windstorm, Rosauers employees worked throughout the night to restock after power outages plunged the stores in darkness. Just minutes before Tom’s Turkey Drive kicked off, the stores opened their doors to a community exhausted but resilient. Thousands of people were without power and still managed to drag themselves into the stores to volunteer, donate or just say hi to Tom and the crew. Companies dug deep and donated more money than we thought imaginable. Avista had crews that were out all night trying to restore power for 200,000 customers and the company donated thousands so people could eat, celebrate and bask in the warmth of fellowship.

The stories have grown and so has the process. Economic downturns and windstorms proved daunting but doable over the decades. What has happened the past two years was crippling to the community and the world. When the pandemic hit and the shutdown ensued, it became clear that events like Tom’s Turkey Drive would have to change. Late summer in 2020, KREM 2 and Second Harvest started meeting to discuss what Tom’s Turkey Drive would look like during the pandemic. The team worked furiously over Zoom meetings to make a plan. Rosauers had to figure out how to procure the food and provide a safe outlet for shoppers to support the cause. Second Harvest would have to work with the Washington National Guard to help with the logistics of packaging and distribution. KREM 2 would have to ask people to look past their immediate pain and frustration and give. It was a big ask as so many people were struggling financially, emotionally and physically. Distribution had to be shifted to a drive-thru only process and no one knew how or if it would work. But Second Harvest and the National Guard did not shirk from the challenge, rather they embraced it. And the day came. Tuesday, November 24th 11,000 Tom’s Turkey Drive meals were handed out at the Spokane Interstate Fairgrounds to thousands of families. It was done safely and swiftly and set a new standard of excellence by the whole team. That year, Tom’s Turkey Drive was the largest (financially) to date. When the Tom’s Turkey Drive team sat down to our own Thanksgiving meals that year, we gave thanks to every person who volunteered, donated and received. And the tradition continues.

“It’s just a wonderful, wonderful way to be human, to be kind. It’s the best thing I’ve ever been involved with,” says Sherry. And Tom’s Turkey Drive will continue. Tom Sherry, KREM 2, Second Harvest and the whole team is committed to continuing the legacy that supports our area families during the holiday season. And yes, the lines are still long and the need is still great. And as long as that continues, we are committed to making sure that at the end of that line is a meal. Tom’s Turkey Drive meals will be sold throughout the month of November at area Rosauers. We plan on welcoming back family and friends to volunteer and we will be at the Spokane Interstate Fairgrounds to distribute meals. Tom’s Turkey Drive is a living legacy and at the center will still be our best friend and favorite weatherman, Tom Sherry.